By continuing to browse this site, you accept the use of cookies. Find out more OK 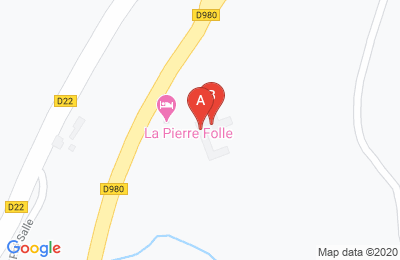 La Pierre Folle is undoubtedly one of Cluny's oldest hamlets.
Burgundy is known for its "pierres" or stones; legends abound especially in this area between Charnay, Cluny and Charolles about stones with crazy powers, stones that dance, that move on their own, others that collapse while still others featuring engravings. Druids from Celtic times built these monuments on selected sites, at the crossroads of their routes or at the sources of natural springs, and conferred upon them a wide range of powers, like collecting heavenly water, guiding planetary alignment, dictating travel times and astonishing onlookers.
It is said that our Pierre Folle, or crazy stone, had become a nuisance to the local farmer around 1840 and was dismantled. In the local paper at the time, an article reported the incident and explained that the stone interfered with the farm's activity. The land continued to be worked until the 1950's, before gradually falling into dereliction and eventual ruin, to the chagrin of local residents.
In 2008, we decided to purchase the site's vestiges. All that remained were the walls of most of the original structures. The oldest building dates back to the 18th century, its resistance no doubt tied to its use as the farmhouse. The other building from the 19th century was in slightly poorer condition and required structural wooden supports. Our love of these old stones and wood motivated us to take on this restoration project. You too will be overwhelmed by the site, charmed by the original stonework combined with modern amenities, the enjoyment of high-quality cuisine, the peace and quiet of our patio with its adjoining natural pool and attractive vegetation, the surrounding pastureland, as well as the spacious, comfortable and elegantly-appointed guest rooms.
Pierre Folle is located on the outskirts of Cluny, at the crossroads connecting Mâcon, Cluny and Charolles. Our inn offers a relaxing atmosphere, just a short 12 minutes from the Mâcon-South exit on the A6 motorway and 11 minutes from the high-speed Mâcon-Loché rail station, making for an ideal stopover on the way to holiday destinations, such as ski resorts for those coming from Paris or Northern Europe, and travellers making their way southward, to the mountains or seaside

All rooms are disinfected with ozone before your arrival and we respect barrier gestures.